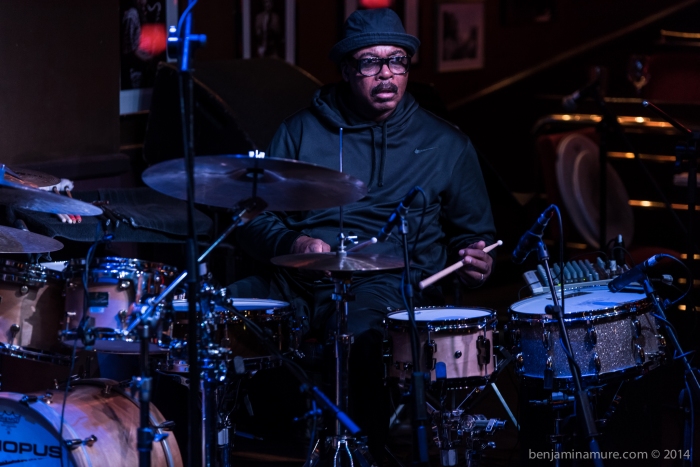 The 67-year-old drummer Harvey Mason has come a long way since his work in the 1960s with Erroll Garner and George Shearing.  Perhaps best known for his time with Fourplay and Herbie Hancock, Mason has toured the world with musicians of all styles and is reputed to have appeared on over 1000 records.  After reducing a hectic schedule of session work to concentrate on his own output, his latest CD Chameleon (Concord Records CRE 34113-02) contains new material alongside older tunes.

Mason made his first appearances at Ronnie Scott’s this week.  From the beginning of Breaking Bad, his ability to carry off stupendously dextrous and complex figures with an air of relaxation was a joy.  A master was at work – variously tapping his fingers, stroking the skins and slapping the cymbals – yet this was much more than a technical demonstration.

The influence of Hancock was never far away, and a couple of his classic compositions – Actual Proof and Sly – were featured.  New Zealand-born keyboard player Mark de Clive-Lowe fiddled with an array of electronic equipment, but he meant business when he settled at the Rhodes for Tokyo Station and the grand piano on Either Way.  An improvised duet with Mason was an inspired highlight.

Most of the melodic duties fell to the excellent Kamasi Washington, who played tenor saxophone for most of the first half and soprano for the majority of the second.  One of the soprano-led pieces was Take Five, where Mason’s contribution to this old staple (in common time, rather than the customary 5/4) was sublime and reminiscent of Joe Morello’s beautifully constructed solo on the 1959 original.

Electric bass player Ernest Tibbs did everything right.  He chose his notes carefully during Black Frost, and his rhythmic drive and harmonic intelligence brought out the best from his colleagues.

The familiar line of Chameleon signalled the end of the concert.  Co-written by Mason with his colleagues from the Head Hunters band, it had a flowing oscillation between restrained quietude and bustling energy.  The encore came with a mellow Butterfly, which was prefaced by the razor-sharp blast of Seven Steps to Heaven.  This gig packed a punch, and fully justified Mason’s decision to hit the road with a working band.

Earlier, we were treated to the unusual spectacle of the Japanese band Tokyo Chutei Iki, a ten-strong group of baritone saxophonists led by Akira Mizutani: Junichi Kamiunten, Ryota Higashi, Hiroshi Suzuki, Akira Kito, Yoichi Tsutsui, Masato Yamamoto, Takuya Matsumoto, Chouemon Machida and Kosei Nagata.  Dressed in black from head to toe (save for the red and white scarves round their necks – could they all be Arsenal fans?) they did their best to dodge the staff and unsuspecting customers as they wandered off-stage and found their way to all corners of the packed club.  The dectet was certainly entertaining and theatrical, but there was scope for more harmonic movement and variety.