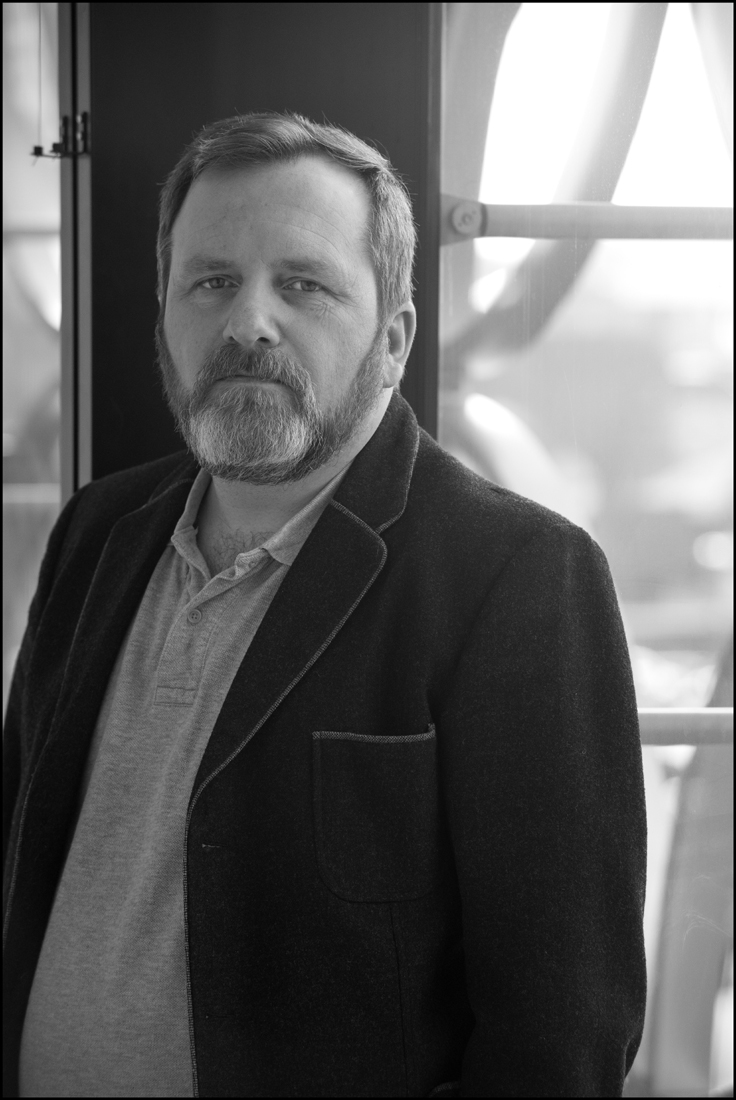 I met with Steve Williams on 23 February 2016 at the New Library of Birmingham where he was due to follow up his never-ending research into the Birmingham music scene and to have further meetings relating to his UKVibe passion. Over a coffee we discussed common musical interests and found that we had a number of mutual acquaintances in the business. My portrait of Steve was shot at the library.

Steve’s musical adventure began by watching Blondie on the TV and listening to the Jackson Five via his father’s influence. Early records bought at The Diskery during his school lunch break included The Spencer Davis Group, Yardbirds, Animals and The Who. Aided by the purchase of a Vespa scooter this developed into a love of House music, Rap and Soul music as the “rare groove” phase erupted. The “jazz room” at the Powerhouse All-Dayer events sowed the seed for his passion for jazz. Jazz now became his main focus of interest along with all things Curtis Mayfield.

Says Steve: “I had been working on the Isle of Dogs for six months and befriended a chap who had some Mayfield albums. When I returned to Birmingham all I wanted to do was buy everything on Curtom Records. The strings and arrangements were way better than most other soul I had been listening to. I still own a lot on the label and its associates.”

In 1990 he joined a sound system called Crush Pack and was frequenting more record shops and V.I.P. Record Fairs which meant that the flow of music became more accessible. He credits Straight No Chaser magazine’s launch in 1988 with “helping to focus my attention” and by this time he had joined the first of four pirate radio stations, Metro FM, where he “put together a jazz show every Saturday afternoon”. He continued to trawl the record shops and cites Same Beat Records, Summit, Don Christie and The Record Centre in Birmingham as regular haunts together with Decoy and Expansions up in Manchester, “all necessary to bring fresh sounds to the airwaves of Birmingham”. His radio spell included a short time at Power FM and a longer one at P.C.R.L. before a final stint in 1994 on Premier FM.

Vibe fanzine was launched on 1 January 1993. “I wanted to help promote the local music scene, promote events taking place and talk about some of the artists”, says Steve.

UK Vibe is now in its 23rd year with an extensive archive of interviews, concert reviews and album reviews. There was a recent candid interview with saxophonist composer Chris Bowden revisiting his influential album Time Capsule. A cross-section of the many artists interviewed include Brian Auger, Archie Shepp, Steve Williamson and Orphy Robinson. “Equal emphasis is given to the photographer,” says Steve. “The photographer is very important to us. We spend a lot of time in interviewing the artists and want to archive these on film for the future.” He adds: “I hate sterile press shots as they are emotion-less.”

Steve’s relentless attempt to fill the gap in the market, is one without advertising or sponsorship. “It’s just about the music!” is how he puts it.  “A desire to give smaller-known names a little boost and the bigger names eternal respect.” He summarises simply by saying: “I want information to be more available to people than it was to me during the ’80s and ’90s. Magazines are almost a thing of the past and their content is either lost or far from easy to access. That’s why I am helping with the Birmingham Music Archive and The Pirate Archive – to put on-line everything and anything I stumble upon in my day to day musical journey.”