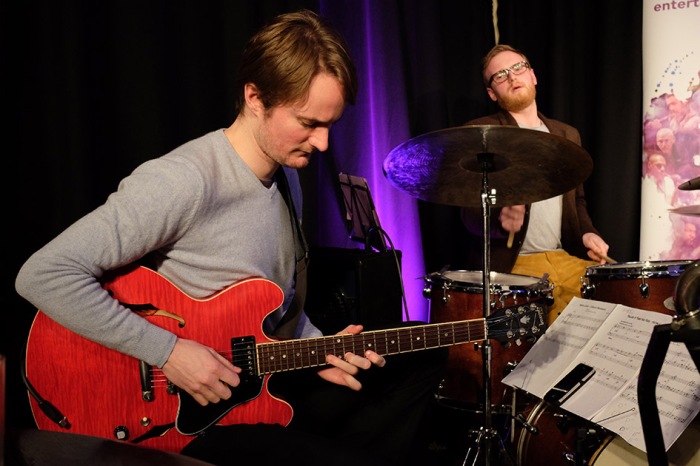 The personnel – and you’d be forgiven for finding this novel, as the information I’ve been getting has been changing every couple of days – was Ant Law on guitar, Michael Chillingworth on alto saxophone, clarinet and bass clarinet, Ivo Neame on piano, Tom Farmer on double bass and Dave Hamblett on drums. And if the band wasn’t quite as advertised (at least by Birmingham Jazz and on this site) well, gosh, there were no complaints.

Law’s first album, released last year, was called Entanglement, the soon to be recorded one might just be called Symbiosis. Now you might think Law has extricated himself from some rather complex relationship and now finds himself in a more balanced romance, but he’s not revealing and such personal stuff. What he did make clear regarding Entanglement was that it took its name from quantum mechanics, and the suggestion last night was that the symbiotic balances Law has in mind are similarly scientific, as well as being musical, of course.

Two new pieces had the Symbiosis tag, though one was also called, appropriately, Leafcutter Ant. Both these and in a way all of Law’s writing explores multiple melodies and multiple rhythms, which in some hands could result in music that was not only difficult to play but also difficult to listen to. Thankfully, while I have no doubt the former is true, the latter is certainly not.

The accessibility of the music is not only down to the remarkably talented band, but also to the way in which Law gives each solo a different setting and atmosphere. There is none of that old-fashioned head-solos-head pattern with the rhythm team remaining in a similar groove throughout – oh no! Hamblett, sitting in for regular drummer James Maddren, but sounding like he’d been playing this stuff for decades, moved from jerky, near hip-hop one minute to lithe swing the next. Farmer and Neame were constantly moving accents and general mood, while Law would provide a chug for some soloists and spacey shimmers for others.

The other remarkable aspect of this music is the way Law and Chillingworth, clearly channelling that symbiotic thing, weave and interlace their tandem melody lines – even before the head has ended the dance has begun – and then extend them out into seemingly effortless, long, sinewy tunes. Magical stuff!

A hugely rewarding evening in friendly company, then, with the best beer in town and up close to an exceptional fine band. Friday evenings don’t get much better.