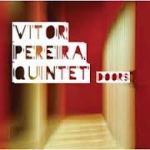 Another offering from F-IRE’s excellent F-IRE Presents series (more on that at a later date), Portuguese national and now London resident Vitor Pereira brings his take on modern life in the capital. It’s the culmination of three years work on Middlesex University’s  BA Jazz programme under the guidance of British Jazz luminaries such as Chris Batchelor, Nikki Iles, Rob Townsend and Mike Outram.

Citing those most hip of guitarists Pat Metheny, Jonathan Kreisberg and Gilad Hekselman, Pereira proudly displays his love of that kind of melodic, driving, often odd-time signatured post-bop that has made all of the above so successful. And so the record goes.

However, there is the odd surprise, evidenced clearly in the first number, Coffee Break. Sauntering along nicely, grooving riffs and quirky breaks all leading the listener’s ear on a merry dance. Kreisberg particularly would be proud of this one – Pereira’s tone is a clear hark to his hero. A well constructed solo by the band leader, then a break away to a sweet four-bar riff, gently harnessing interplay between the two horns: Chris Williams’ alto saxophone and James Allsop’s tenor.

Then BANG! There it is. A sudden switch to full blown overdrive on guitar that certainly takes no prisoners. It’s abrasive, a harsh full blown angry tirade as Williams showers us with squeaks and squeals in his now time-honoured way. Didn’t see that coming. Dare I muse that this is the ‘British’ (Bulldog?) coming out of the music? Think riff-rock driven Britbands such as Led Bib or TrioVD.

It sounds to me very much like someone who has been to music college. The music is measured and has probably been through several editions before reaching its landing point.

My only criticism of the writing is that occasionally the register of the tenor saxophone is low enough that we almost lose it when counter-balancing Williams’ alto. But apart from that, it’s a very interesting record. The interplay between the two horns is often fascinating, while Eddie Hick and Ryan Trebilcock hold down the rhythm section with groove, seamlessly driving the band through the multi-faceted tunes.

Hick also delivers a cracking solo at the very end of the record on Last Link In The Chain, too, which is worth waiting for. Whilst not flying all over the kit, he shows a maturity beyond that of most drummers his age.

I sincerely hope Doors does open some for what is an intriguing group with a strong line-up and well-delivered compositions.