Yelena Eckemoff Quartet – Leaving Everything Behind

This is the Russian-born, U.S.-resident pianist and composer’s ninth jazz release since 2009. And its follow-up is all ready to go early in 2017. So, prolific Yelena Eckemoff certainly is! You might expect therefore that she would make “quick” music, needing little preparation, perhaps loads of live performances… But you’d be wrong. Her albums, with a variety of top-notch players, sound meticulously planned and produced. And their quality is consistently high.

This one has a regular collaborator, Billy Hart, who followed on from Peter Erskine as her U.S. drummer of choice, and he is joined by two new faces on Eckemoff recordings, Mark Feldman on violin and Ben Street on double bass.

Feldman is a particularly inspired choice. While Yelena’s background is in classical music, Mark’s is in both country and classical music, and so they both bring to their jazz and improvisation vast, broader musical hinterlands that feed into their creations. And Eckemoff’s music truly merits that expanded horizon. There are strong jazz elements in it – lithe rhythms, a loosening of the imagination, a flexing of the improvisational wings – but at the same time it avoids many jazz conventions and feels completely free of jazz cliche. That is surely down to the writing which is more classical in its impressionism and sense of development; you won’t find any head/solos/head stuff here! Yet its openess, its flexibility and freedom is definitely true to jazz. 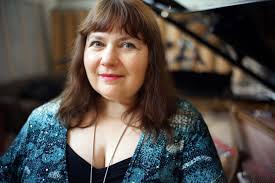 Yelena Eckemoff’s marvellous generosity of spirit can be felt most deeply in her music, but it also extends beyond its sounds – she has taken to including a written poem for each of her compositions and her paintings adorn the covers. The poems are especially helpful in providing ways into the music for the listener: images, thoughts and especially feelings which are there in heightened form in the melodies, harmonies and rhythms of the band’s performance.

The themes Yelena explores on Leaving Everything Behind are deeply personal and in many cases deeply sad – the loss of childhood, leaving one’s family behind, the bittersweet Tears Of Tenderness that flow as one confronts one’s parents frailties – but the music is never maudlin, rather it embraces the richness of these feelings in spite of their sadness. And there are lighter touches too in the form of erupting volcanoes, Mushroom Rain and the train which linked her home in Moscow to that of her grandparents in Tambov – the Love Train as she recalls it.