The annual Match & Fuse Festival has become a major part of the jazz calendar in the UK. It is a two-day festival the focus of which is on bringing to the UK a number of mostly unknown bands from continental Europe and mixing them with British bands. The short Match & Fuse tour that led up to the festival and played Birmingham last week with two bands from Scandinavia, The Horse Orchestra and Krokofant, and one from Birmingham, Ben Muirhead’s Stepmother Jag, typifies its philosophy. A key part of the approach is the conduction that concludes the concert, a guided improvisation featuring members of the groups led by Dave Morecroft, chief honcho at Match & Fuse.

What Match & Fuse does really well is programme a wide range of bands from Europe, specifically 23 acts from 14 countries. The programming team clearly has an excellent awareness of what is happening in different countries, and the programme truly gives a snapshot of the European scene. Bands such as Krokofant or Mario Rom’s Interzone, or performers such as Leila Martial, Valentin Ceccaldi and Susana Santos Silva are clearly some of the most exciting voices in European jazz. The festival also has the knack of creating partnerships that work: Julie Kjaer with Chris Sharkey worked really well, as did that between the afore-mentioned Susana Silvana Santos and Evan Parker. Also impressive is the high proportion of women among the performers and the number of younger attenders the festival attracts. 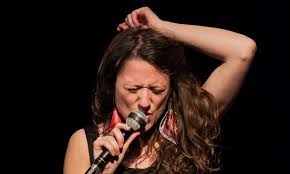 The first night took place in the New River Studios up in the Manor House/Haringey area of north London in a multi-room space that had the feel of a converted warehouse or factory and created a strong underground feel appropriate to the festival ethos. Let Spin opened proceedings with a fine set that set the tone for the evening, with full-on, high energy music. Horse Orchestra, a band based in Denmark but with players from different Nordic countries, added some variety with their very entertaining blend of swing and free improvisation. But the most impressive set of the evening came from the French duo of Leila Martial on vocals and Valentin Ceccaldi on cello. This set had a real passion to it with Leila mixing free wordless improvisations with what struck me as elements of French chanson; Valentin added very intense and invigorating accompaniment.

The set by Estonian/Swiss singer Ingrid Lukas, although excellent, suffered by coming immediately afterwards and by being in a broadly similar style. In general, l felt that the programme, although presenting an interesting number of bands, focussed perhaps a little too much on high energy, ‘in-your-face’ bands. The final act, Krokofant, one of my favourite Norwegian young bands, suffered from coming at the end of a long evening of ‘full-on’ music, playing to a thinned out audience. They also suffered from a poor sound balance.

The Saturday programme took place in the vibrant Dalston area of London and its two key venues, The Vortex Jazz Club and Café Oto. I stayed for most of the evening in Café Oto with its two spaces, the main room and the intimate Project Space. A particular highlight of the evening was the improvised set with Evan Parker, just on tenor sax, and Portuguese trumpeter Susana Silvana Santos. Having heard Susana at both the Moers and Saalfelden festivals, I was eagerly awaiting this, and I was not disappointed. The set was totally improvised with the two players engaging in a fascinating musical dialogue which gradually became more and more integrated. I was impressed by the strength and confidence of Susana’s lines on the trumpet and the way Evan’s contributions and reactions took his playing into different territory.

Other duos also impressed: Julie Kjaer, an improvising saxophonist and flautist interacted with some amazing electronics from Chris Sharkey, and saxophonist Cath Roberts played a thoughtful set with guitarist Anton Hunter in their Ripsaw Catfish duo. I enjoyed the set with Swiss harpist Julie Campiche playing her own material with Pete Marsh and Paul May. The set I probably enjoyed most, however, came from an Austrian trio, Mario Rom’s Interzone with Mario Rom on trumpet, Lukas Kranzelbinder on bass and Herbert Pirker on drums. I was particularly taken by the interaction between Kranzelbinder and Pirker behind Rom’s fluent lines on the trumpet. I was surprised that they were not included as part of the main stage programme.

A few thoughts: the festival needs to tighten up on its stage management; with such a tight programme it is vital that bands start and finish more or less at the scheduled time. On the Friday, late running made it difficult to decide when to move on to a different room and set, and I ended up catching only part of certain performances when I would have liked to hear the whole set. Perhaps this is inevitable with such a packed programme, and I wonder whether a rather less full programme might, in fact, enhance the festival. However, in conclusion, I think that Match & Fuse now plays a vital role in the British scene by introducing to British audiences European bands that have a fresh and exciting approach to the music and play to large audiences at European festivals, and mixing them with UK bands that have a similar philosophy.