Wolves Are People Too 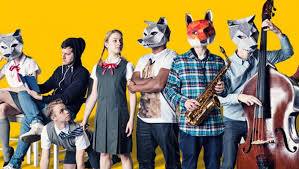 Wolves Are People Too

Wolves Are People Too is a collaboration between bandleader and composer David Austin Grey, Birmingham Royal Ballet dancer and choreographer Kit Holder and illustrator Nicholas Robertson to create a dance performance with David Grey’s Hansu-Tori group playing live on stage. The narrative tells the story of two part-wolf, part-human children, Yuki and Ame, brought up by their human mother, Hana, after their part-wolf father dies, and their dilemma about whether they live their lives as wolves or children. The story line is based on the Japanese animation film Wolf Children directed by Manoru Hosoda.

This made for a delightful evening. David Grey’s score and Kit Holder’s choreography fitted together extremely well and both the playing and the dancing from members of the Birmingham Royal Ballet company were of a very high standard. The narrative is clear throughout and I was particularly impressed by the way Ruth Brill conveyed the anxiety and stress of the mother and the way that Laura Day and Lewis Turner as the daughter and son brought to life the difficulty of deciding between life as a wolf and life as a human.

David Grey’s score was essentially quite mellow but very appropriate to the mood of the piece. Where, however, the mood became more dramatic, particularly in the scene where the father died, the music underpinned the action very effectively. The writing also made excellent use of the textures possible from a front line of alto and tenor saxophones (Chris Young on alto sax and Lluis Mather on tenor sax and flute) frequently blended in with the wordless singing of Eliza Shaddad. I particularly liked the features in the second half for Lluis Mather on flute and Eliza Shaddad on vocals which integrated so well with the dance. Also impressive was that the dance took on board that the writing involved improvised solos from members of the band rather than a totally fixed score.

It’s great to see collaborations of this sort, i.e. jazz with dance, Birmingham Royal Ballet with jazz musicians based in Birmingham, an illustrator with both dance and music. I have always felt that jazz too often keeps itself isolated from other art forms, and can build audiences through collaborations of this type. This was evident from the very healthy size of the audience in the Patrick Centre and the favourable comments I overheard about the music.

Let’s hope that this is the first of many such collaborations.