For jazz lovers in Birmingham, 2015 was a year of increasingly strong pub gigs, a new festival and a much-heralded visit by one of jazz’s most important contemporary composers and band leaders.

The contribution that the many graduates (and current students) of Birmingham Conservatoire’s jazz course make to the musical life of this city just grows and grows each year, and nowhere is it more in evidence than at The Spotted Dog in Digbeth every Tuesday evening.

Jazz @ The Spotted Dog is organised by drummer Jonathan Silk and trombonist Richard Foote. So how was 2015 for them?

“We’ve been fortunate to host some incredible gigs at our beloved Irish pub. Particular highlights of the year include some big names: Hans Koller‘s quartet with John O’Gallagher, Julian Argüelles’ Tetra as part of their UK Tour, the force that is Liane Carroll…”

A little south of the city, the jazz night is a Thursday, the venue is Bearwood Corks Club and the organisers are Silvershine Jazz Club, keeping alive the tradition started by the late Andy Hamilton. 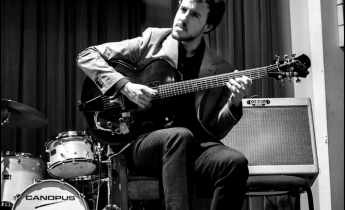 Paul Foad, from Silvershine, identified their gig of the year: “Our favourite memory from 2015 was in April, selling out the gig by New York guitarist Gilad Hekselman within a week of booking him. Having never understood the obsession our children had with social media, we soon found out what a valuable resource it is in the modern age. Now we’re hooked!”

Move just north of the city centre and Birmingham Jazz has its regular home at The Red Lion in the Jewellery Quarter most Friday evenings.

Not only did Birmingham Jazz put on a programme of strong weekly gigs, it inaugurated a weekend festival particular to the Jewellery Quarter. July’s Legends Festival focused on the music of Miles Davis with trumpeter Henry Lowther as special artist in residence, and a string of good gigs featuring established players like Tony Kofi, Alan Barnes and Chris Biscoe as well as up and coming stars like David Austin Grey and Mark Pringle.

While the weekly “Dog” sessions, the Silvershine ones and BJ’s may be the most frequent in the city, there are all sorts of other regular jazz nights.

Fizzle specialises in the more experimental and spontaneous end of the jazz spectrum and under the direction of pianist Andrew Woodhead it now boasts a strongly supported fortnightly early Tuesday evening at The Lamp Tavern in Digbeth, with some additional gigs elsewhere, often in association with TDE Promotions, the personal side of Tony Dudley-Evans’ jazz activity in the city.

Saxophonist Chris Young runs a Sunday night jam session at The Brown Lion in the Jewellery Quarter, and there have been gigs at The Fiddle & Bone in the city centre, The Blue Piano near Five Ways, at The Dark Horse in Moseley and at The Sun at The Station in Kings Heath. 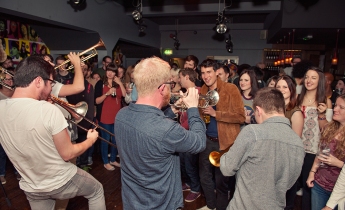 That last named was the host venue for Pilgrimage, a monthly feature for cutting-edge young bands hosted by Young Pilgrims. And a very successful venture it has been.

Jazzlines promoted an impressive run of concerts at the CBSO Centre, bookended by bands led by two Birmingham Conservatoire tutors: saxophonist Mike Williams’ Sama in January and drummer Andrew Bain’s Player Piano in October, as well as gigs at the Hare And Hounds in Kings Heath. But the Jazzlines 2015 highlights were saved for the autumn: a funky evening of world jazz from bassist Marcus Miller in the Town Hall and the long-awaited visit by the Maria Schneider Jazz Orchestra from New York.

The MSJO not only played a superb concert at Symphony Hall, with a follow-up gig by a quintet of orchestra members, but also spent a day in workshops with Conservatoire students. 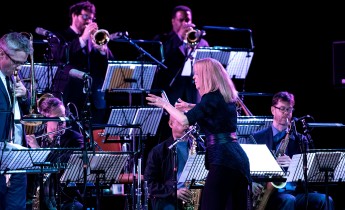 Jeremy Price, head of jazz at the conservatoire, certainly made it his 2015 highlight: “Maria and her entire band appeared at the Town Hall, giving the students a chance to be directed by her, in the presence of many New York jazz musicians that for many of the students have been iconic role models and great sources of inspiration for years.

“It was great to see student drummer Gwilym Jones swapping roles with Johnathan Blake from Maria’s band, and then students Vittorio Mura and Tom Niblock trading sax solos with their heroes Donny McCaslin and Scott Robinson. Maria rehearsed various sections of her pieces Pretty Road and Arbiters Of Evolution, mixing up the personnel of both groups for demonstration and for just making music together.”

This was the second year of Jazzlines’ Fellows programme, and their concerts caught Tony Dudley-Evans’s ear. “My jazz highlight of 2015 has been the three concerts with the Jazzlines Jerwood Fellows, Yazz Ahmed, Lauren Kinsella and Chris Mapp.  Each has shown an exceptional creativity and fully justified their selection as Fellows,” he said.

This was a memorable year for recorded music too: Birmingham record label Stoney Lane was launched and released the Mike Fletcher Trio’s Vuelta and Mark Pringle’s A Moveable Feast. And the Birmingham Jazz Orchestra made its debut recording, Burns, the music written by trumpeter Sean Gibbs.

All this has made 2015 a rather good year for jazz in Birmingham. The Spotted Dog Bros’ Richard Foote sums it up very nicely:

“I’d like to pay tribute to the growth and positive energy that I feel is happening in the scene, whether it’s Snarky Puppy selling out the Birmingham Institute to a 1000-plus music fans screaming after solos they’ve never heard the like of before, or if it’s the back room at Fizzle so cramped you cannot get a seat. It’s super-exciting and inspiring to see what’s going to happen next year.”