Award-winning jazz pianist Mark Pringle is a man on the move. He has a new album A Moveable Feast coming out this month and is currently touring the UK before heading off to Germany. We had a quick email back and forth.

“Mark Pringle is an exceptionally gifted pianist and composer, and a remarkable improviser. A Moveable Feast is a brilliant ensemble piece and a striking example of his writing and playing.”

You don’t get testimonials much stronger than that; it comes from the late John Taylor, one of Mark’s teachers – along with John Turville, Hans Koller, Joe Cutler and Liam Noble – during his years studying at Birmingham Conservatoire.

Mark graduated this summer and picked up the Jazz Department Performance Prize, the Dean’s Award for exceptional achievement and the Principal’s Prize for outstanding contribution to the life of the Conservatoire. He adds those to last December’s Peter Whittingham Award.

Still in the first half of his third decade, Mark has already got about a bit. He started out in Wells, Somerset, he’s been living, studying and playing in Birmingham for the last four years, with a stay in Paris along the way. This autumn he moves to Europe to continue doing all those things in Berlin, Copenhagen and Amsterdam as part of his placement on the European Jazz Masters programme.

Here is our email Q&A:

Q What was the first jazz you can remember hearing and what was it about it that you found so appealing?

A I took to improvising on piano fairly young, and so became interested in the idea of jazz before really hearing any. The first recording I remember having was a National Trust compilation CD of British trad, featuring the music of Kenny Ball, Chris Barber and Acker Bilk. Such great melodies! The obsession really took off with a Bill Evans CD (Empathy/A Simple Matter of Conviction), and Oscar Peterson’s Night Train, both purchased from Broad Street Jazz, the old jazz CD shop in Bath. Following this came mail order requests (and Christmas lists) for Monk and Coltrane, Herbie Hancock’s Maiden Voyage, Miles, Sonny Rollins, and later on Keith Jarrett, Gwilym Simcock, and Kit Downes, all of whom have had a huge and lasting impact. I really prided myself on that small stack of CDs, and got to know them inside out. I was a genuine jazz obsessive in my youth, only getting into rock bands and other music at around 16 (by which point I had a lot of catching up to do with my friends). The whole appeal was that this music came from improvisation. I got such a buzz from trying to do the same on piano, and still do.

Q Which musicians/composers have influenced you most? What do you most like about their music?

A As a pianist, Keith Jarrett has always been a big inspiration. Such an outpouring of joy when he plays, and incredible melodic invention. Standards Vol. 2 was a particularly important album for me growing up. Also, although part of the younger generation, Kit Downes’ first album, Golden, had a big impact on me in my late teens. I’d never heard composition or improvisation like it before, with a really unique identity and amazing group vibe. I still call it my favourite album, and go back to it regularly, always finding something new. More recently Paul Bley, John Taylor and Liam Noble have been particularly strong pianistic influences. 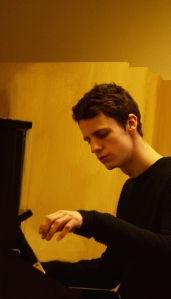 I loved composing short pieces as a youngster but these largely revolved around what I happened to stumble across at the piano, rather than specific compositional influences. More recently however I have taken much inspiration from the music of Messiaen, Django Bates, Morton Feldman, Lutoslawski, Richard Ayres, Elliott Sharp, Liam Noble and Laura Jurd, as well as having an enduring love for old Bombay Bicycle Club songs. I also like taking inspiration from sources outside of music: people, places, experiences, books, films… to name a few.

Q You have played with musicians from various countries in Europe. Do you detect different styles/influences/“language” in their playing? Are there musicians you would like to work with in the future?

A Yes, I was very lucky to have the opportunity to study in Paris for four months in 2013, through which I formed connections with musicians from all over Europe. For sure there can be some variation in overall taste between different nationalities, but there is also always an abundance of common ground. The great thing I’ve found about the young European jazz community is their open-mindedness, positive energy and enthusiasm to make music with one another. There are no divisions.

I have some really special Portuguese friends who I definitely want to keep playing with into the future (it’s really happening over there believe me!), and a great guitarist friend from Sweden, Tobias Andersson, with whom I have tour plans for 2016.

Q Do you think there is more of an overlap these days between musicians who play in the more “formal” jazz field and those who are more free improvisers? Do you enjoy both, and what do you like about each area?

A Absolutely, the lines are most definitely blurred, and it’s great. From my vantage point, jazz musicians nowadays have their ears and minds wide open. It’s not unusual to hear a musician playing on a standard one night and in a freely improvised context another.

I really enjoy both and for different reasons, both presenting their own challenges. The heightened awareness of sonority, space and texture when trying to freely improvise is an exhilarating feeling, and the really good guys have a strong awareness of overall musical shape, which is so hard to achieve (still working on that one). I have so much respect for the musicians who do it well… Everytime I hear Paul Dunmall play at Fizzle I leave with my brain fried.

On the other hand there is something unbeatably fun about old-fashioned “blowing” on a tune. I’ve had some of the most fun playing music in this context, and it’s something you can do with musicians all over the world having never met them and regardless of language. What becomes really interesting is when the two worlds converge in some way, something I’ve been interested in exploring recently with my music.

Q Has studying in Birmingham and playing with musicians here influenced your music? Is there an identifiable “Birmingham sound/style”? If so, what are its main features?

A Most definitely, my whole musical outlook has changed hugely as a result of being part of the Birmingham scene for the last four years. It’s a great crowd, with lots of individual characters, lots to be inspired by. I always compose music with the specific musicians in mind that I know will be playing it, so the players here have very much shaped my music, in a crucial way.

In terms of a Birmingham style, I’d say it’s a pretty eclectic mix at the moment. There may be periods where certain ideas prevail over others but on the whole it’s very diverse, which I think can only be a good thing. What I do know is that there is a great energy, creative spirit and inclusiveness amongst the players here, which is very healthy.

Q The trio format is a favourite of jazz pianists. Is it yours? Or do you prefer having a horn in the band? Or playing solo? Or, as with A Moveable Feast, writing for a large ensemble?

A I like all those settings but there is something special about the openness of a trio, where you have so much freedom to take the music in different directions. That flexibility makes it creatively very exciting, especially when playing with people you have strong empathy with, which I am lucky enough to.

I get a different kind of enjoyment from writing for A Moveable Feast, where I have the chance to be really creative with texture, harmony, orchestration, timbre… Although structurally it’s often more restricted than a trio, it’s sonically richer and more varied, which feels great to play in. Luckily you’re allowed to do both!

Having said that, I also can’t wait for saxophonists Joe Wright and Lluis Mather to join my trio for three London gigs in late September. They’re sure to be really exciting ones.

Q Tell us more about A Moveable Feast as a project. Are there things you can tell us that will make listening to the new album more enjoyable/more accessible?

A A Moveable Feast is a 12-piece ensemble of strings, horns and rhythm section, playing my music and featuring some amazing musicians, including trumpeter and Jazzlines/Jerwood Foundation fellow Percy Pursglove.

The music is heavily inspired by my experiences living in Paris, and so inspirations behind the pieces come from a myriad of extra-musical sources. Ranging from the opening track A Real Bombshell – Messiaen’s reaction on first seeing a score of Debussy – to a nod to Ernest Hemingway (from whom the title A Moveable Feast is also taken) in The Writer, to woodland creatures and strange beasts in Ode To The Trees, and, despite it’s dark nature, Hasha’s Theme is actually a piece about my cat (she’s lovely really). At the same time there are overriding themes of nature, literature, the chaos of cities, and the lives of people who inhabit them.

Q What does the immediate and the more medium-term future hold for you and your music?

A First of all The Moveable Feast album release tour (supported by Help Musicians UK) with 17 dates for both trio and full 12-piece ensemble, which began in August with Manchester Jazz Festival and the Proms Extra Late Series (for BBC Radio 3 broadcast), and running until late September with dates including The Vortex, Southbank Centre, and of course Birmingham’s Spotted Dog, Symphony Hall Foyer and The Red Lion.

Almost immediately after this I am jumping on a plane and moving to Berlin, to study for a Masters on the European Jazz Masters (EUJAM) programme through the Jazz-Insitut Berlin. I will spend two years studying at conservatoires in Berlin, Copenhagen and Amsterdam, something I am looking forward to immensely, and will no doubt inspire much new music!

Where you can see and hear Mark Pringle: