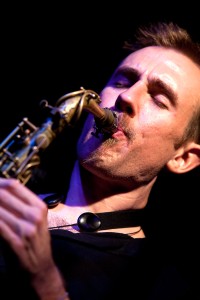 It’s been a year since I caught up with saxophonist and flautist Mike Fletcher and in the intervening months the Birmingham-based musician has been chosen to represent this city as a European Concert Halls Organisation (ECHO) Rising Star and has formed a new trio with Olie Brice on double bass and Jeff Williams on drums.

Although Mike is most often seen with an alto saxophone mouthpiece between his lips, he also plays flute and has in the last few years been playing the relatively rare saxophone that fits in between alto and tenor, the C Melody instrument.

Q Are you playing the C Melody throughout? Or a variety of that and alto? Any flute as well?

A I’m not setting any of this in stone. In this band there’ll most probably be a mix of sax and flute but, as in most of my own small group projects, I’ll make a decision as to which they are on the fly. At the moment I feel like C melody and C flute fit the music most comfortably but that is subject to change.

Q How did the trio come about – what drew you to that format? Are there trios in jazz history which have particularly inspired you?

A This format is something that I have always enjoyed. As a horn player with a fairly broad harmonic and timbral palette I find the relative openness of sax-bass-drums particularly conducive to my style of improvisation. In fact, I am as inspired as much by the lack of a chordal instrument as by the trio format per se. Of course there are some pretty seminal sax trios; (Sonny) Rollins’ various versions, the Ornette Coleman Golden Circle trio, Albert Ayler with Gary Peacock and Sunny Murray are some particular favourites. I also find myself drawn to larger chordless ensembles, of which there are many but a current favourite is the Sam Rivers band on the album Dimensions And Extensions. This format I use with my Different Trane project.

Q How did you choose to work with these particular players? How did you get to know them?

A My first experience of playing with Jeff was through Hans Koller. These encounters haven’t been particularly numerous but I don’t think it’s a secret that Jeff is one of the most inspiring and creative drummers there is. The decision to ask him to play my music wasn’t one I had to think too hard about! I’d known Olie’s playing for a while before I finally met him through Mark Sanders when they played in trio with the Polish saxophonist Mikołaj Trzaska. Over a couple of beers it became apparent that we shared a very similar approach to music so it was a fairly logical step to start playing together. As well as this trio we’re both involved in ‘Fletcher/Brice/Jozwiak’, an improv group of which you’ll be hearing more soon (We have an album out on Slam Productions in July…)

Q Are the tunes all yours?

A The majority of the tunes are mine but Olie has contributed a couple too. Some of the tunes will be familiar to people who know my music and some not.

Q Is there an over-arching idea to this band? How loose is it – is there some fairly free stuff, unrehearsed?

A The band doesn’t have a concept as such so I suppose the over-arching idea is that we perform our music. The thread that runs through everything is that we are all interested in the aforementioned openness. When we play there is an understanding that the form/pulse/harmony, etc, is all there to be utilised but isn’t compulsory. The improvised sections are unrehearsed, but I imagine this to be the case in most jazz bands.

I actually find it quite bemusing that people feel the need to categorise musicians based on their perceived stylistic allegiances, in our case as either “jazz” or “improv”. This is one of the topics that Olie and I have spoken about at length. It seems, certainly among musicians, that this distinction is no longer particularly useful, or indeed relevant. I recall you commenting in your review of Paul Dunmall’s MAC gig that I wasn’t necessarily known as an improv musician. Equally I think there are some people who might be surprised to hear me playing standards. My “thing” is that I’m neither one or the other exclusively. I like both and my way of writing and playing hopefully demonstrates this. In terms of the band’s activity, you can expect to hear elements characteristic of both “jazz” and “free” but you’ll probably have to be paying pretty close attention to notice the switch.

Q How do you see it fitting into your own personal musical development?

A Considering the above I feel like this band is the most complete representation of my music to date. My other bands (Different Trane and my jazz orchestra) follow along similar lines conceptually but I consider them to be outlets for my composition as much as for my playing. Olie and Jeff bring a massive musical and creative resource to any project that they are involved in so I can’t wait to see how things develop over the course of the tour.

Q Did you start this band specifically for the ECHO Rising Stars work or had you already started it when you were chosen for this?

A You could say that the ECHO thing acted as a catalyst. I knew that I wanted to do something with these two and I was actually on my way to meet Olie to play when I got the call from Jazzlines asking me about my current small band project. So it seemed like a fairly logical step to combine the two.

You can find out more about Mike Fletcher here. You can hear the results of his latest venture at the following venues: