Of course, we won’t just hear any influences that Jonathan might have picked up. He already has a lot of strongly original ideas on how he wants his music to sound, and this will be the most high profile showcase yet for a massed group of young, mainly Birmingham-based musicians.

Jonathan is a drummer and composer from Scotland who graduated a few years back from Birmingham Conservatoire’s jazz course and since then has been leading groups small and large, playing as a side man in many more, teaching and working hard to promote live jazz in Birmingham.

This showcase concert is the culmination of his year as a Jazzlines Music Fellow, supported by the BBC Performing Arts Fund Music Fellowship scheme. It has given him the resources and time to study with some of the best composers in the business, including a trip to New York to learn from Schneider, possibly the pre-eminent jazz writer and arranger of her generation, and to compose new material for this Jazzlines concert.

His big band originally formed as a project during his time at the Conservatoire, and last year released its first CD, Uncouth, with trumpeter Percy Pursglove as star soloist.

The Jonathan Silk Big Band concert is at the CBSO Centre tomorrow at 8pm. Tickets are £12 and you can book here.

You can also hear Jonathan’s smaller band at The Yardbird this evening (Thursday). With Jonathan on drums are Nick Rundle and John Fleming on tenor saxophones, and Andy Bunting on keyboard. The bass chair in the band is held by either Chris Mapp or Nick Jurd.

The Jonathan Silk Quintet will be playing from 9pm, with a support band beforehand and a jam session afterwards. Entry is free. 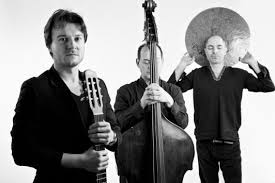 Stratford Jazz has an exciting guitar-led trio at No1 Shakespeare Street in Stratford-upon-Avon on Wednesday. Maciek Pysz is a Polish guitarist now resident in London and he has brought together a very classy three piece with Russian-born bassist Yuri Goloubev and Israeli-born drummer Asaf Sirkis.

Their album, called Insight, was released last year (reviewed here) and shows Pysz to be an exceptionally accomplished and wide-ranging musician on both acoustic and classical guitars. The fact that the classically-trained Goloubev is one of the finest arco players and that Sirkis also has world music percussion skills gives the trio great flexibility.

They play Pysz’s original compositions plus their arrangements of tunes by Ralph Towner, Keith Jarrett and Chick Corea.

The Maciek Pysz Trio is on from 8pm, tickets are £10 (students half-price) and there is more here.

Other recommended Midland gigs this week:

Tonight: Kinda Dukish, a large group dedicated to Ellington and the other great big band composers is in it’s regular monthly spot at the British Oak from 8.30pm.

Friday: The Arabella Sprot Quartet – Arabella on tenor saxophone, Steve Tromans on piano, Alex Phillips on bass and Ric Yarborough on drums – is at the Symphony Hall cafe bar for the Jazzlines Free session at 5pm. Look out for the band’s new album, just out.

Friday: Tumbleweed – recent Dankworth composition prize winner Andrew Woodhead on piano, Chris Young on alto saxophone and Ben Kane on drums – are at The Red Lion in the Jewellery Quarter from 7.45pm for a Birmingham Jazz Club Night – £5 for non-members. More here.

Sunday: The Dan Bayliss Quartet – Dan on alto saxophone, Gareth Fowler on guitar, Stuart Barker on bass and Jim Bashford on drums, is at the Rose Villa Tavern in the Jewellery Quarter. Starts at 8pm, modest entrance fee.

Tuesday: The Andrew Woodhead Sextet – Andrew on piano, Nick Dewhurst on trumpet, Elliot Drew on saxophone, Richard Foote on trombone, James Banner on bass and Jim Bashford on drums – is at The Spotted Dog in Digbeth, starting at 9pm. Donations should be generous.