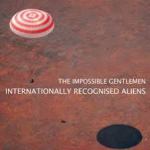 The coming together of the young British pianist Gwilym Simcock with the slightly older fellow Brit, guitarist Mike Walker and the US drummer Adam Nussbaum, together with the positively ancient – and I mean that in the most complimentary of ways – electric bassist Steve Swallow back in 2010 seemed a slightly unlikely combination at the time. A brief listen to them – touring as the Gwilym Simcock Quartet – was good reason to overturn that view. This was a four-way marriage made in heaven.

With a name – The Impossible Gentlemen (I have a feeling that must have been a suggestion from Walker or Swallow, both noted for their original humour) – and an album of tunes, many of them written by Simcock and Walker before the band was conceived, there was development and even more potential realised.

Now, with another tour behind them last autumn, comes a second album. And it’s simply brilliant. Or complexly brilliant. In fact, it’s both.

These are compositions written with these players in mind, and three are Simcock/Walker co-writes. Two of these, the opener Heute Loiter and Modern Day Heroes, which the band played at their CBSO Centre gig in Birmingham last December, make that great “jazz sophistication meets rock power and groove” thing that I think the Gents do better than nearly anyone else. Walker is just a sheer joy on Heute Loiter – endlessly inventive, coming up with a bottomless pit of lovely electric sounds, and the whole thing breaks down in discordant delight at the end.

Simcock’s Just To See You, with Swallow taking the tune on electric bass before passing it on in relay to Walker and then Simcock against a loping, brush-driven beat from Nussbaum and producer in on double bass, is, I think I can safely say upon repeated listenings and lengthy reflection, the loveliest thing I have heard all year.

The third Walker/Simcock composition, Love In Unlikely Places, grew out of a spontaneous improvisation, showing how in tune the pair are; Crank Of Cam Bay is based on a Swallow anecdote (he plays the role of the curmudgeon so well I’m not sure we’re totally convinced by his claims that this is about some other guy he knows…) set to a suitably tongue-in-cheek tune by Walker; Barber Blues is not, Simcock stresses, about a bad haircut, the Barber in question being Samuel and one his pieces Gwilym played as a lad.

The closer, the only Swallow tune, returns us to the wryly romantic – it’s called Ever After. There is, in this one and in Just To See You, another example of the uncanny empathy between these musicians. Listen to how Walker homes in on the highly distinctive sound Swallow gets from his heavily-wooded electric bass and how he emulates its tone on his electric guitar. It’s gorgeous.

Which is a word to attach to the whole album: together with sophisticated yet accessible, revealing as much spirit as intelligence, as much heart as head. When you see this band in performance you are aware of the deep warmth and friendship which unites them. They may not get to play together very often, but, my, do they love it when they do. That same warmth is clear in the sounds coming from my hi-fi speakers. A strong contender for my album of the year.

The Impossible Gentlemen, with Rodby in for Swallow, are touring her next month. The dates are: