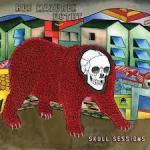 The result is a psychedelic, spacey, multi-layered electro-acoustic trip; epic and, at times, intense and scary. The music was conceived for the ‘We Want Miles’ exhibition in São Paulo and was recorded live in that city over two days at Teatro do SESC Pinheiros, in November 2011. It also features three musicians native to São Paulo: Mauricio Takara (cavaquinho, percussion), Guilherme Granado (keyboards, electronics) and Carlos Issa (guitar, electronics).

Opener Galactic Ice Skeleton conjures up visions of a slowly looming dense storm cloud, beginning with eerie, spacey, electronic blips and gradually gaining intensity with sonic ebbs and flows on the way. It features the rabeca, a Brazilian viola-like instrument, played by Thomas Rohrer (who also plays C melody sax on this record) from Switzerland and now a São Paulo resident.  Solos from rising-star vibraphonist Jason Adasiewicz, cornet from Mazurek and Nicole Mitchell’s high-flying piccolo, thread in and out of the eye of the storm. It’s all propelled by the staggering drum work of John Herndon, founder of post-rockers, Tortoise.

Voodoo and the Petrified Forest is another pulsating storm-riven epic with a percussive Latin beat, crazed guitar work from Carlos Issa and harrying flute from Mitchell before Mazurek’s formidable modulated cornet bursts through the clouds of the churning soundscape. Passing Light Screams is a less intense tune with sparse, spaced-out cornet and vibes, which are given room to provide a reflective atmosphere before an electronic maelstrom descends.

Vibraphone opens Skull Caves of Alderon, and it continues with a jaunty theme, but things build gradually to a climax with some distorted, firey and abrasive guitar from Issa. After the meltdown of the previous track, closing piece Keeping the Light Up is a short and fragile piece featuring some spooky rabeca, along with delicate flute and Granado’s sinister electronics evoking a nightmarish quality.

Skull Sessions covers a broad canvas and can seem, at times, bewildering in its scope and constantly shifting kaleidoscopic transformations. It’s a sprawling experimental blend of unique ideas, but there’s a fundamental groove underpinning this exotic, otherworldly and multi-layered experience.