Beyond The Blue
(Motema MTM-87)

Not only has London-born, New York-resident Tessa Souter brought together a fine band for her fourth album (her second on the Motema label); she has enlisted some big-name composers, too.

How about Ludwig van Beethoven, Maurice Ravel, Joaquin Rodrigo, Claude Debussy and Tomaso Albinoni? And then there is Frederic Chopin, Franz Schubert… the list goes on.

All the songs here are made up of familiar melodies from the great classical composers, mostly adapted and with added lyrics by Souter. And the band comprises Steve Kuhn on piano, Joe Locke on vibraphone, Joel Frahm on tenor and soprano saxophones, David Finck on bass and Billy Drummond on drums, plus Gary Versace on accordion on a few tracks. 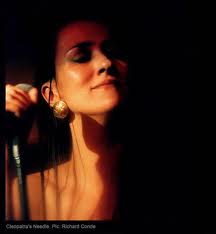 Souter has a straight, no-nonsense style, sometimes flirts with cool and, when she wants to, ups the emotional heat in a controlled way. Her invitation to Dance With Me, set to a Borodin Polovetsian Dance is a little too firm for seduction, more like instruction. But there is nothing wrong with that. What man is going to refuse?

Chiaroscuro is adapted from Albinoni’s rather overplayed Adagio, but in this style it sounds fresh and new, and a gorgeous, thoughtful piano solo from Kuhn enhances it still further.

If another jazz version of the slow movement from Rodrigo’s Concierto de Aranjuez might seem like one too many, the arrangement, which adds atmospheric sounds from Versace and a mix of tenor and vibes over a snare military swirl that is taken from elsewhere on Sketches Of Spain, together with the ultimately beguiling nature of that melody, especially as sung by Souter and played by Frahm, tend to tip the balance back towards making it an essential addition to Miles and Jim Hall and the rest.

We jazz listeners might have always considered them as American Songbook Standards but we have forgotten that those chestnuts Baubles, Bangles And Beads, My Reverie and The Lamp Is Low were, of course, themselves plundered from classical works. And that trio of tunes is here, too, which means we can compare new with old and find the new every bit as worthy of inclusion in future Standards songbooks.

It all makes for an exceptionally classy package. Highly recommended.

Like Loading...
‹ Reich related, plus tenor specialists in the week ahead
CD review: David Weiss & Point Of Departure ›