Bam. Flap. Groove… There is a real statement of intent for this record from the very outset as bandleader Tom Bancroft flicks a drum ‘n’ bass style groove out of his brushes, the “magic fingers of Tom Cawley” (so described by Peter Gabriel) digging in deep to carve out a rhythmic accompaniment on muted piano strings. Bassist Per Zanussi meanwhile takes a back seat, awaiting his opening bow which soon follows. Yet these statements are brief, allowing each musician to weave in and out of the limelight with a consummate ease often the goal of trios who have been touring for years.

These guys have (at point of recording) been together just seconds, minutes, hours, days at most. It’s an impressive feat, and validates Bancroft’s decision and desire to capture the “special energy when improvisers first meet”. There certainly is something there, and it’s interesting to hear the results, but I personally find the ‘compositions’ on offer more satisfying. Boy Meets Boy Meets Girl Meets Girl and Don’t Break Your Heart both contain something of the folk roots, beauty and contemplation no doubt encountered in Bancroft’s chosen surroundings of Pathhead, a hotbed for Scottish Folk and Jazz musicians. Tom Cawley is in his element here, with highly considered, measured selection of lines to create melodies that are head-spinning, yet not juxtaposed to the constant forward motion provided by Zanussi’s bass riff and Bancroft’s grooving pushes on the ride cymbal.

The Mole Of History Takes A Bow (And Trips…) on the other hand is just downright fun. It’s an obvious tip of the cap to Ornette Coleman; a playful, slightly bluesy fast(ish) swing into Latin head opening up into free soloing that propels into a time-no-changes barrage of joy and a fantastic solo from Bancroft himself. Meanwhile, the records two (or three; the first being two songs in one “mash up”) covers bookend the record. One wanders if this was by design? If so, very clever. 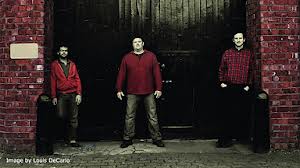 Jeff Buckley’s Last Goodbye certainly provides a good climax. However, by this point I feel too tired to really appreciate it! Only when going back to the last few songs on a separate listening was I able to really immerse myself in what are, undoubtedly highly accomplished and interesting musical offerings played by expert musicians. The problem is that this record is possibly too much of a good thing.

The whole record is pretty “heavy”, to use layman’s terms, particularly with the emphasis on a lot of freely (or close to) improvised passages, which I applaud whole-heartedly. The problem I found was in the ability to take the record in as a whole. Simply put, I couldn’t. This is a fantastic record for 45 minutes, but for some reason the next 25 seem a bit too much. As I say, the last few tracks are superb, just as good as anything else on the record (as proven by going back to listen to the back half of the album on a separate occasion), so what is the solution?

I understand the problem that was encountered. The first session (where they recorded free improvisations only) went too well. The ideas flowed, the atmosphere felt great and you just want everyone to hear every last second of it. But for me too much of it is on the final release. I’d rather hear a couple, maybe three short improvisations that add something to the record if there is to be a mix of freely improvised and part-composed music. Why? Because (on this record) the real statements seem to be in the composed and arranged tunes, the ones which have been carefully considered, skillfully put together note-by-note. There is a reason they are there and a reason they have been arranged in that way (compositionally).

Perhaps some improvisations could have been saved for another day. Or perhaps a couple more compositions thrown in and there could have been two releases? This isn’t a problem unique to this record, it’s something I’m hearing time and time again with the advent of 70minute CDs. I also know a lot of other journalists and listeners are saying similar things about other records.

It’s not to say that no record should ever surpass an hour; a lot of my favourite records do, but then they really are something special and have the ability to hold your attention, almost trance-like in doing so. And it’s also definitely not to bash free-improvisation. Again, some of my favourite records and concert experiences have been in wholly improvised formats. It’s just a question of balance here and longevity of the listener’s ear. It’s a cracking record, but there’s just too much of it, much like trying to eat your favourite pudding when you’re already grossly full on the mountain of steak and chips you had for the main course. Uncomfortable, yet delightful when you come back later for more.