The number three was looming large for saxophonist Paul Booth. Not only was he turning 33 years old, he wanted to explore working in a trio, and then that developed into a trio of trios, and all the tunes on this CD have a three in the title.

The opening trio on the original Booth composition, Menage A Trois, has the great Clarence Penn on drums and Matt Brewer on double bass, and was recorded in New Jersey.

On Jaco Pastorius’s Three Views Of A Secret, the band has Ross Stanley on Hammond B3 and Andrew Bain on drums, and is recorded in this country.

And on another Booth original, Chorinho Triangular, Booth, on soprano, is joined by Phil Robson on guitar and Adriano Adewale on percussion, also recorded here, but with a distinctly Brazilian feel to both the writing and the mood. 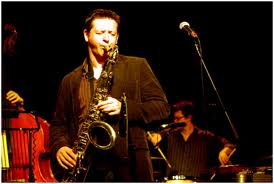 And so the album progresses, with first one trio and then another, each full of character, and, across them, the saxophonist able to explore the wide-ranging skills he has been able to develop in a career which spans serious jazz playing in small jazz clubs and equally serious rock and R ‘n’ B playing in much larger settings with the likes of Steve Winwood.

The other tunes include Osvaldo Farres’s Tres Palabras, Nick Drake’s Three Hours and Charles Mingus’s Self Portrait In Three Colours, as well as two more Booth originals. Oh yes, each trio gets to play three tracks.

Apart from the manifold saxophone treats between these digits, there is the added delight of hearing Phil Robson getting all bossa on us on acoustic guitar, the energy that the locked-in Stanley and Bain can transmit, and, of course, the supremely musical drumming of Mr Penn.