As he reaches the end of his Quintet’s tour, bandleader, drummer and occasional thejazzbreakfast contributor, JJ Wheeler reflects on what makes it all worthwhile: Enjoyment.

First, may I say what an absolute privilege it has been to spend four-weeks (on and off) touring with four guys who are not only amongst the best young musicians in the country, but also blessed with the finest of character. This has been noticed by promoters and audiences wherever we have played. To quote Peter Bacon’s review of Hans Koller Sextet last Friday (whilst we were playing in Bradford),

“Koller quoted drummer Paul Clarvis as suggesting: “You make the best music with your friends”, adding that it was important to “make sure your friends are motherf@*+ers”… Well, what motherf@*+ers these were!”

I can safely say I am fortunate enough to be in a similar position.

I must also make quick mention of all the promoters, especially Laurie, Martin, Ben, Steve, Alistair and (of course!) Tony D-E, all of whom showed great encouragement and hospitality to the band wherever we went. We were privileged enough to meet some wonderful people in the audience as well, with warmth and enthusiasm for our beloved genre of Jazz wherever we went. 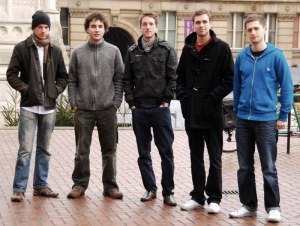 The band - so good JJ gives them sweary names!

On that note, it occurs to me that, in this time of austerity that can sometimes feel so glum, with arts funding (alongside just about everything else) being cut and petrol/food prices going up, live music (especially jazz) can become something of an escape. In my opinion there is a real outcry from society for something to lift the burden of day-to-day struggles and the doom-and-gloom of 24-hour rolling news. Following one of our earlier gigs I was drawn into discussion with a lady who claimed:

“I never thought I liked Jazz, but there’s something really spiritual and uplifting for the soul in the music”.

Let me make clear, this is NOT a reflection on MY music (it would be incredibly egotistical of me to say it was!), but a general observation on the nature of Jazz.

Admittedly, I was shocked that she had hit the mark so poignantly! And, with time to mull over this comment I soon realised that, in all the seriousness and pressure of band-leading, writing and performing “serious artistic statements”, sorting out finances, keeping audiences, promoters and band-members happy, etc, I was somewhat glossing over the most important aspect of all: enjoyment.

Once a performer is enjoying the act of creating their art, I firmly believe this radiates into the audience, generating an atmosphere and level of participation within the music as acommunity (another key feature of society, longing to be renewed) that, for the length of a gig or perhaps even beyond, can make an impact. And even if it doesn’t change the world; at least everyone in the room can say they’ve had fun.