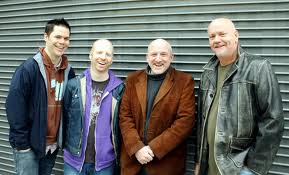 Some distorted guitar sounds signal the beginning, and soon we’re running with a version of Jerome Kern’s All The Things You Are stripped of its lovey-doveyness and instead used as a rhythmic work-out for harmony tenor saxophone and edgy guitar with full bass and drum pulse beneath it.

The guitar belongs to the Israeli now based in New York, Oz Noy, but he is the least known of the four that give their surname initials to the band: on tenor is Seamus Blake, on bass is Jay Anderson and on drums is Adam Nussbaum.

If their take on the Kern is initially a bit of a shock, one soon gets used to it and transported by the energy and musicianship of these four musicians. Track two is a much more appropriate rendition of Monk’s Played Twice, and the band reveals its Woostock-era, hippy nostalgia with a gorgeous and dreamily atmospheric float through David Crosby’s Quinnevere, from the first Crosby, Stills & Nash album.

From there it is original compositions through to a fine finale, Joe Henderson’s Isotope, which again gets Noy’s very heavy distortion intro.

Every time I listen to this disc I start out with some reservations and have them thoroughly dismantled, finding myself soon beguiled. If Noy is somewhat derivative, taking some of his style from Scofield and the rockier side of Abercrombie, he can certainly cut it in his solos, even if his distortion sound is a little heavy-handed; Blake was a favourite from way back, and is a musical taste refreshed by seeing him live at The Cross in Moseley this time last year. A real tenor story teller in long and always logical solos. Listen to the two of them rave together on Will Call.

Anderson holds it all down with in a kind of backroom fashion and some tidy solos, including the nicely articulated intro to Days Of Old, while Nussbaum is always a joy, a real invigorator with his great, deep spirit. He drops, with Noy’s help, into a nifty near dub reggae beat in the Monk, having fluttered beautifully with brushes at the start.

So, something of a musos’ supergroup, and one which I hope will make more recordings and  get to tour over here.They’d be storming, live.