Home › Preview › The week ahead in gigs

The week ahead in gigs 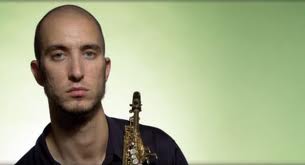 Since jazz was first identified as a distinctive musical style, I guess there have always been some interesting practitioners in New York. And if the golden ages in the city’s jazz history ebb and flow, even the quiet times are still interesting.

Not that I think this is one of those quiet times. No, things are pretty exciting in the 21st century in New York, and a compact bunch of young musicians can take a lot of the credit for that.

Although we’ve been able to hear the music on recordings, with one or two exceptions (we did get Sorey on drums with the John Escreet band a while back, for example) we haven’t yet been able to experience the music in concert .

Which makes tomorrow’s visit by the Steve Lehman Octet a particularly welcome one.

Lehman has a distinctive voice on the alto saxophone but from the CDs I’ve heard he is equally important as a writer and arranger of this new jazz.

It possesses an exacting, almost mathematical basis upon which improvisations are constructed with all kinds of fresh harmonies. The rhythms are often urgent and equally complex.

It’s music that is cool and hot at the same time, sweet and sour in equal parts, and if it appeals predominantly to the head, the heart and feet also get a look in.

Lehman brings with him to Birmingham a very strong band. Tyshawn Sorey and Drew Gress are on drums and bass, Dan Peck adds further bottom end action on tuba, Chris Dingman is on vibes, and the horns are Jonathan Finlayson on trumpet, Mark Shim on tenor saxophone and Tim Albright on trombone.

They have a recent CD out on the Pi label, called Travail, Transformation and Flow. It has all those qualities about it, and I am optimistic we will hear some of it tomorrow evening.

The band plays at the CBSO Centre from 8pm. Tickets are £14 (£12 for members and concessions) and these can be booked at www.thsh.co.uk There is more information about this Birmingham Jazz gig at www.birminghamjazz.co.uk

Before that you can hear another outstanding saxophonist leading another strong band.

The Chris Biscoe Quartet has Chris and Tony Kofi on saxophones, Larry Bartley on bass and Stu Butterfield on drums, and they will be playing music from their Eric Dolphy and Charles Mingus repertoire in the Symphony Hall foyer bar for this week’s Rush Hour Blues early Friday evening session.

It’s free, starts at 5.30pm and ends at 7pm, meaning you just have time to bolt down a snack before the Lehman gig.

Tonight at the Back Room, George IV in Lichfield, two young bands, the JJ Wheeler Quintet and the Tom Dunnett Quintet, play for free from 8.30pm.

On Tuesday there is jazz at The Spotted Dog in Alcester Street, with M.O.L.E., a septet led by Mike Fletcher on alto saxophone and including Lluis Mather on tenor, Dan Nicholls on piano and Rob Anstey on bass. It starts around 8pm and goes till late.

On Wednesday the Jazz Club at the Rainbow in Digbeth celebrates its 5th birthday with a double header of Trio VD and trumpeter Sam Wooster’s new project, Husk. Start time is 9pm and entrance is £5. More at www.birminghamjazz.co.uk