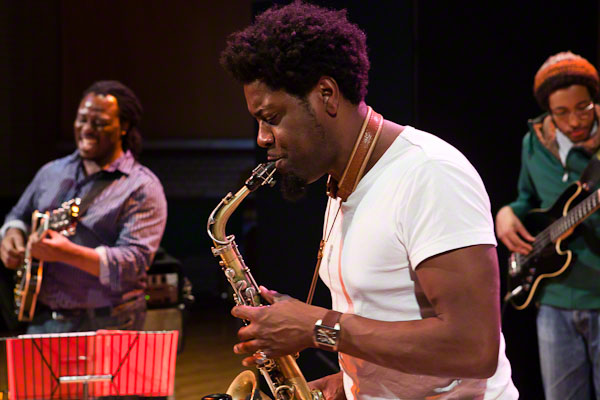 Soweto Kinch has explained that for him playing saxophone and rapping are as integral to him as his two arms, and if he leaned towards the saxophone playing arm in the first set last night, he fully flexed both in the generous second.

It was a shrewd move, acknowledging that the more formal concert setting of the CBSO Centre is less accustomed to a freestyling MC than it is to an improvising instrumentalist.

So, for this Birmingham Jazz gig, we were led in, in moderately gentle fashion, with the quartet warming up on Never Ending and Suspended Adolescence, two instrumental work-outs from the new CD The New Emancipation, before Kinch added a rap and guitaris Femi Temowo  added a sung vocal on Trying To Be A Star.

Two more instrumentals – An Ancient Worksong and A People With No Past – completed the first half, accentuating the blues sources in Kinch’s music and also confirming that this was a band now approaching maximum temperature and revving free.

That temperature rose even more in round two with a wild mix of scorching four-way instrumental pieces and hip hop exuberance. The CBSO Centre has played host to many unusual things in its time – how could it not with such adventurous organisations as Birmingham Contemporary Music Group and Birmingham Jazz using it regularly? – but I am pretty sure last night was the first time these four wall had heard some freestyle hip hop with Kinch fitting words offered by the audience into an improvised rap to an improvised bass-driven backbeat.

This was an end-of-tour, pre-Christmas homecoming for the Birmingham-based artist and he was clearly in the mood to party; he had the usually rather restrained Birmingham Jazz audience shouting responses on Raise Your Spirit and doing a more flamboyant version of the jazz head nod as the band rose to its explosive finale.

Temowo was funkily eloquent on guitar, Karl Rasheed-Abel pliant on bass and Graham Godfrey meticulous as he mixed jazz swing and hip hop backbeat together on the drums.

But the chief cheers must go to Soweto Kinch – his abundant technique, his astonishing eloquence, his deep passion and his fierce intelligence all feed his performance. He plays saxophone and raps with a real physicality, as if his life depended on them. On the evidence of last night’s show, he’s certainly living life to the full – and both arms are in perfect shape.